Freising invites you to feel the pulse of history

The bustling historic quarter of this cathedral city extends between Cathedral Hill and Weihenstephan Hill. Rows of magnificent residences that were once the homes of prosperous burghers and cathedral canons flank the busy market street. Their colourful facades with richly detailed ornamentation create the quarter’s uniquely spellbinding atmosphere. The focal point of this historic architectural ensemble is Marienplatz, with its Marian column dating from 1674 as a conspicuous landmark. The square is the centre of celebrations at city festivals and home to a lively bi-weekly farmers’ market. Lined with attractive boutiques and stores stocking unusual and exclusive products plus cosy cafes and restaurants, it’s an inviting spot to linger, shop and indulge yourself. The heart of the historic city is a popular meeting-point for locals and visitors alike. 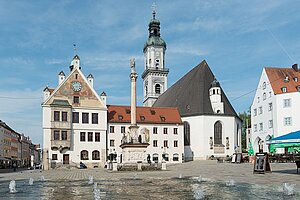 To the south is the Asamgebäude, once the prince-bishops’ college. The west wing of this magnificent Baroque building contains the most magnificent ceremonial hall in Freising: the Asamsaal, named after Georg Asam, who created the glorious ceiling frescoes in 1709. The city museum, also located in the Asamgebäude, brings history to life as a vivid and immediate experience. (Please note that the building is currently undergoing restoration and is not open to the public.)

On the west side of the market square is the imposing Town Hall, built in 1904/5 to echo the style of German late medieval and Renaissance official buildings. Behind it soars the Late Gothic Church of St George, rightly famous for one of Old Bavaria’s most beautiful Baroque towers. Intrepid visitors that climb the 84 metres to the balustrade (open every Saturday afternoon from May to October) are richly rewarded with magnificent views.

A few steps further, behind the church and on Rindermarkt (the former cattle market), the Zierer-Haus is a stunningly beautiful sight. The lavishly ornamented stucco façade of this former burgher’s residence makes it one of the region’s loveliest rococo buildings.

At the south-east corner of the square is the Marcushaus. Built in the 16th century, it bears testimony to Freising’s status as a trading and mercantile centre – and to the fate experienced by its Jewish citizens in the Third Reich. A plaque commemorates its owner in that era, Marcus Lewin, and further Jewish families that fell victim to Nazi persecution.

A favourite spot around every corner

Every Freising inhabitant has a list of favourite places in the historic quarter, where imposing burghers’ residences and former breweries rub shoulders with artisans’ houses, open streams flow along the streets, and enchanting overgrown gardens hide away. It’s so easy to let yourself be caught up in the moment and drink in these beautiful surroundings. Seek out your own personal favourite spot! But don’t miss our three unique spots in the historic old quarter: 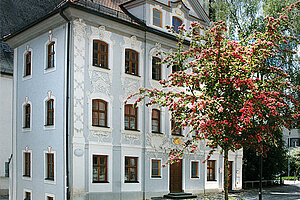 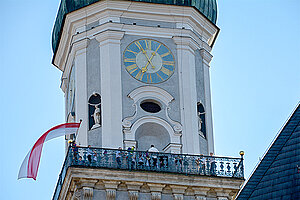