Discover exhibitions in the Old Prison and the Tower 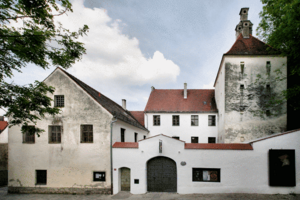 Where once courts presided, people were kept in custody and even witch trials were held is today home to exhibition spaces, a small museum and a cosy, rustic wine bar. The Old Prison on Fischergasse was built in the 17th century and served as the court jail until 1965. It then stood empty for 40 years until a private initiative brought the former fortifications back to life, professionally restored the masonry and opened the building to the public. The first-floor rooms are sought-after gallery spaces for exhibitions by individual artists and artists’ associations. They are used all year round. The Prison Museum has at its heart the prison tower, still containing the ancient cells from the Baroque era. You’re guaranteed to feel a shiver down your spine! 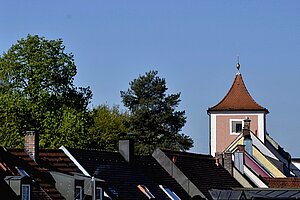 The tower is visible over the roofs of the city

The four-storey Bürgerturm (Citizens’ Tower) on Unterer Graben is the only remaining visible part of the medieval city fortifications. It was probably built around 1350 as a watchtower. Now renovated by a public initiative and funded by donations, the historic structure with its striking tented roof has housed a museum (“Grabenmuseum“) since 1996. Its changing exhibitions cast fascinating light on various aspects of the craftsmen’s and artisans’ professions, with images, documents, items of everyday life, rarities and curiosities. You’ll be amazed at how city history can be brought to life.

Open for exhibitions. For dates and opening hours, visit www.altesgefaengnisfreising.de/galerie/events (currently available in German only)