Bishop Corbinian and his bear – and Freising 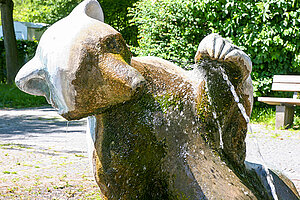 Bears can be found everywhere throughout the city centre.

No, Freising doesn’t have a zoo! But it does have a bear –in its coat of arms. In fact, even Pope Emeritus Benedict XVI immortalised the bear in his own personal coat of arms. This heraldic brown bear did not appear by chance, but has close ties to the city’s history. The legend goes that St Corbinian, Freising’s first bishop and founder of the diocese, was travelling to Rome when he encountered a wild bear which attacked and killed Corbinian’s pack horse. The man of God commanded the bear to carry his load instead; instantly docile, the animal obeyed and followed Corbinian to Rome with the saint’s bags on its back. On arrival, Corbinian let the bear go.

The bear with the pack saddle became the emblem of St Corbinian. In Freising the animal is incorporated into the official coat of arms; it is also commemorated as life-size figures along the streets and squares of the city and is a popular souvenir.

Corbinian is also ever-present in Freising 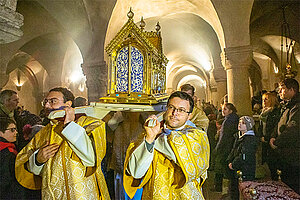 St Corbinian’s Shrine in the cathedral

He has given his name to a bridge, a street, a primary school, a pharmacy and even a beer – to name but a few. The Archdiocese of Munich and Freising celebrates the founder of its bishopric every November with a festival on Cathedral Hill. Youth Corbinian is a regular pilgrimage event and one of the largest faith encounters for young Catholics in Germany. For more information about the annual pilgrimage, visit the website of the Archdiocese of Munich and Freising and the Youth Corbinian page.

For more information about the annual pilgrimage, visit the website of the Archdiocese of Munich and Freising and the Youth Corbinian website (currently available in German only).