Visitors to the Cathedral rediscover themselves in this magical place of power. 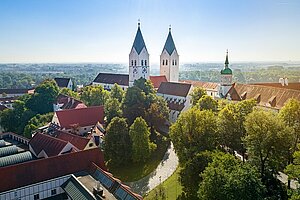 From the outside, the distinctive towers of St Mary’s Cathedral in Freising are a monument to faith and a symbol of hope. In the interior, visitors encounter a unique feast of art and architecture, and are awed by the filigree stucco work of the Asam Brothera, the high altar with its altarpiece by Peter Paul Rubens depicting the Blessed Virgin Mary and the masterful carving of the Gothic choir.

Come inside and immerse yourself in the era when the building was constructed!

The rounded arch of the entrance portal bears witness to the cathedral’s Romanesque origins. It portrays an unusual group of figures: on the left is Emperor Frederick Barbarossa and on the right his consort, Beatrix. It was the Emperor himself that extended a protective hand over Freising when Henry the Lion used trickery to seize the lucrative customs revenues for the bridge over the River Isar at Oberföhring from the bishopric. It was also the Emperor who supported the construction of a new basilica. The cathedral we see today was only built in the ninth century; a church to the Blessed Virgin had previously stood on the site from the early 8th century. In 1159 a devastating fire destroyed the city, including the cathedral.

Its larger successor shows traces of every epoch of architectural style from the High Middle Ages onwards. The foremost artists of each era were commissioned; Peter Paul Rubens painted the altarpiece depicting the Blessed Virgin as Woman of the Apocalypse, a mighty outpouring of colour and form. Today a copy is on display; the original is in the Alte Pinakothek in Munich. The cathedral interior was redesigned with new stucco and frescos to celebrate the millennium of the bishopric in 1724, carried out by none other than the most famous representatives of Old Bavarian religious art of the time, the Asam brothers. It was they who created the glittering Baroque interior.

Now venture down the steps behind the altar and enter a past age that could hardly be further from the gleaming gold and glowing colours of the nave.

In the cathedral crypt, the world seems to hold its breath 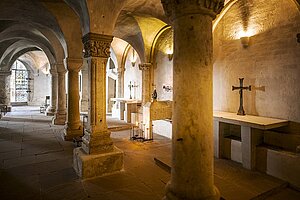 This architectural masterpiece from the twelfth century enfolds the spiritual heart of the cathedral. A precious shrine on a mighty stone sarcophagus is the last resting-place of the bones of St Corbinian, founder of the bishopric,. But the pinnacle of artistic achievement is surely the mysterious Beasts’ Pillar, unique throughout Central Europe. Crafted around 1160 by an unknown stonemason, it portrays figures including knights battling dragons. Perhaps symbols of the fight of good against evil?

(currently available in German only)

Tours of the cathedral